And one about Superman.... 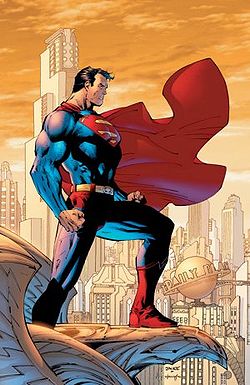 Two men were sitting in a bar in a very tall building in New York. Both were fairly drunk although #1 wasn't as bad as #2.

#1 turns to #2 and says: "Didja know that the wind around thissss buil--building is so strong that if you jump out THAT winnndow, it'll blow you back up here before you can hit the ground?

They proceed to  the window and #1 opens it. He stands on the sill and then jumps out. #2 leans forward and follows his fall.... all the way down....then, suddenly.... ssssswwwwsssshhhh! He's standing on the sill again. "See? I TOLD you!"

#1 chuckles and closes the window. He goes back to the bar, laughing to himself and orders a drink. The bartender makes the drink and brings it over. As he sets it down, he says, "Here's your drink. You know somethin' Superman?