The Greatest Radio play, Movie I have ever heard/seen! 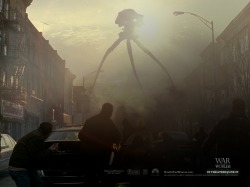 This image and the one below it are from Steven Spielberg's War of the Worlds. The movie was panned by a few who said it was not true to it's 1950 predecessor. That is true because the 1950 War of the Worlds movie was NOT the predecessor to this one! This movie was a video representation of the radio play, written by Howard Koch for Orson Welles. It takes a bit from the novel, some from the 1950 movie and a lot from the radio play. I was very pleased with it.

Some thoughts on the project... 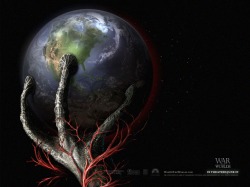 I will grant you one thing about the War of the Worlds.... the book by H.G. Wells is the most boring, ostentatious, plodding and gloomy thing I have ever read. Sorry, HG.... but I see now what Howard Koch, who wrote the script for the radio play that Orson Welles and the Mercury Theatre on the Air did on October 30, 1938, meant when, after reading the novel that Orson gave him with instructions to turn it into a radio play, said... "I quickly realized that I would be able to use only the basic idea from the novel of a Martian invasion of Earth..."

The novel is written from the point of view of an Englishman who is witnessing the Martian invasion, generally from afar. He is the most emotive character I've ever met. He goes on at length - great length mostly - about what he sees and hears.  I can't even read the novel without yawning.

But - having said that, let me say that the whole rest of the project, most of it based on the radio play or the idea of it, is the very best thing I've seen come out of the media in like, forever!

Spielberg expanded on some of the stuff from the play - like the fight scenes. The radio play portrayed the fight scenes as if they were calm, orderly things. Anyone who's been in combat of any kind knows that the exact opposite is true and Spielberg hit it just right.

The radio play is the focus of my love affair with WotW, as we call it.  I have virtually every version of the play or any movie or subsequent recording that come of it or from it.

There is of course, the original - "Orson Welles and the Mercury Theatre on the Air in an original dramatization of the "The War of the Worlds", by H.G. Wells".

Then came the 1950's era movie that was more camp and political horror than anything else. You can almost see the Martians being portrayed as the bad boy commies in this one!

Then, 50 years later, Jason Robards, Steve Allen, Douglas Edwards and Rene Auberjenois (think Odo from ST: DS9 or earlier Clayton Runnymede Endicott III from Benson) and a large cast re-did the radio play for National Public Radio. The producers, David Ossman and Judith Walcutt did an excellent job and it was just as good as the original although I don't think it created the same panic, probably because NPR doesn't have as wide an audience as CBS did!

But speaking of panic - in 1968, radio station WKBW, Buffalo NY re-did the radio play and did it up right! It created nearly the same panic in the Buffalo NY area as did the original play nationwide. The reason for this was probably the fact that they used regular on-air personalities and local area sites and locations.

I have that performance also. There were many other re-creations, notably on the radio in Quito, Ecuador, that so enraged the local citizenry when they found it was a play that they attacked the radio station, set fire to it and burned it to the ground, killing many employees. Ah, the exuberance of those third world nations!

I even tried once to do my own re-creation but the project fell through for lack of performers who were as dedicated to the task as I was. Well, I tried!

If you are interested in War of the Worlds... indeed, if you are a fan(atic) like I am, look below this text. I have changed over to the PRO version of this web builder software and have just uploaded both the original radio play by Orson Welles and the Mercury Theatre on the Air from 1938 and the WKBW version of the show and.
If I can find a digital copy of NPR's version, I will upload that soon, also!

In the meantime, I leave you with these thoughts.... "that grinning, glowing, globular invader of your living room is an inhabitant of the pumpkin patch and if your doorbell rings and no one is there, that was no Martian, it's Halloween!"

Thank You, Orson, for a most enduring and entertaining thing!

Here is a link that genuine fanatics of WotW will find of interest:
War of the Worlds Invasion: Everything you ever wanted to know about The War of the Worlds.
If the player controls do not show, click on the Adobe thingy and the page will reform with the controls
Images and recordings on this site are the properties of their respective Copyright holders. All Rights Reserved.